Scientists from Tohoku University and the High Energy Accelerator Research Organization have developed a new complex hydride lithium superionic conductor that could result in all-solid-state batteries with the highest energy density to date.

The researchers say the new material, achieved by designing structures of hydrogen clusters (complex anions), shows markedly high stability against lithium metal, which would make it the ultimate anode material for all-solid-state batteries.

All-solid-state batteries incorporating a lithium metal anode have the potential to address the energy density issues of conventional lithium−ion batteries. But until now, their use in practical cells has been limited by the high lithium ion transfer resistance, caused mainly by the instability of the solid electrolyte against lithium metal.

This new solid electrolyte that exhibit high ionic conductivity and high stability against lithium metal can therefore be a real breakthrough for all−solid−state batteries that use a lithium metal anode.

“We expect that this development will not only inspire future efforts to find lithium superionic conductors based on complex hydrides, but also open up a new trend in the field of solid electrolyte materials that may lead to the development of high-energy-density electrochemical devices,” said Sangryun Kim of Shin-ichi Orimo’s research group at Tohoku University. 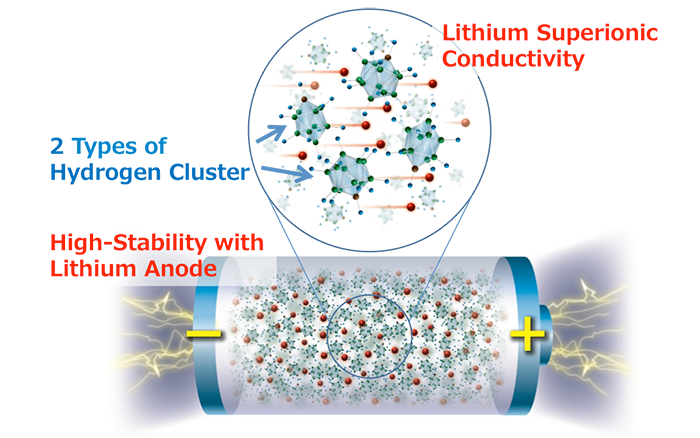 All−solid−state batteries are promising candidates for resolving the intrinsic drawbacks of current lithium−ion batteries, such as electrolyte leakage, flammability and limited energy density.

Lithium metal is widely believed to be the ultimate anode material for all−solid−state batteries because it has the highest theoretical capacity (3860 mAh g−1) and the lowest potential (−3.04 V vs. standard hydrogen electrode) among known anode materials.

Lithium-ion-conducting solid electrolytes are a key component of all-solid-state batteries because the ionic conductivity and stability of the solid electrolyte determine battery performance.

The problem is that most existing solid electrolytes have chemical/electrochemical instability and/or poor physical contact against lithium metal, inevitably causing unwanted side reactions at the interface. These side reactions result in an increase in interfacial resistance, greatly degrading battery performance during repeated cycling.

As revealed by previous studies, which proposed strategies such as alloying the lithium metal and interface modification, this degradation process is very difficult to address because its origin is the high thermodynamic reactivity of the lithium metal anode with the electrolyte.

The main challenges to using the lithium metal anode are high stability and high lithium ion conductivity of the solid electrolyte.

The Tohoku University research team was led by Sangryun Kim from the Institute of Material Research (IMR) and Shin-ichi Orimo from the Advanced Institute for Materials Research (AIMR). Members included Dorai Arunkumar, Naoaki Kuwata and Junichi Kawamura from the university’s Institute of Multidisciplinary Research for Advanced Materials (IMRAM), as well as Toshiya Otomo from the High Energy Accelerator Research Organization.