Scanning the surface of lithium titanate

Scanning the surface of lithium titanate

- Toward the next generation of superconductors and lithium-ion batteries -

Researchers at Tokyo Institute of Technology, Tohoku University and the University of Tokyo have applied advanced scanning methods to visualize the previously unexplored surface of a superconductor: lithium titanate (LiTi2O4).

LiTi2O4 is the only known example of a so-called spinel1 oxide superconductor. Its rarity makes LiTi2O4 of enormous interest to those studying the origins of superconductivity, as it has the highest superconducting transition temperature (of up to 13. 7 K) within this group of materials.

Although LiTi2O4 in bulk form has been studied for decades, little is known about its surfaces, owing to the difficulty of preparing suitable LiTi2O4 surfaces for further analysis.

Now, using a combination of experimental and theoretical methods, a team of researchers including Taro Hitosugi of Tokyo Tech and the Advanced Institute for Materials Research at Tohoku University, has obtained visual evidence of superconductivity on ultrathin LiTi2O4 films, marking a milestone in surface science.

Published in Nature Communications, the study began with the detection of an unexpected energy “gap,” hinting at the existence of superconductivity at the surface. Furthermore, their investigations revealed that the surface superconductivity is in different states from that of the bulk interior. The researchers used two experimental methods to visualise this finding: pulsed laser deposition2 (PLD), a technique that has enabled the production of high-quality LiTi2O4 films under vacuum conditions; and low-temperature scanning tunnelling microscopy/spectroscopy (STM/STS), for precise imaging of the surfaces.

“Imaging the atoms for the first time was surprising, as it's usually very difficult to observe the spinel-oxide atoms,” says Hitosugi. “We then wanted to know the exact atomic arrangement on the surface, and in order to do that, we compared theory and experiment.” 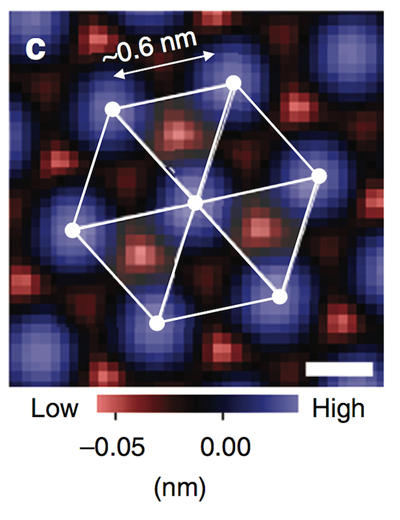 < Figure 1 A zoomed-up image of the atomic arrangement on the LiTi2O4 film surface
The three-fold symmetry indicated here reveals the spinel crystal structure.>

So, to delve deeper into how the atoms are arranged, the team made theoretical calculations that led them to consider four types of surface cut from bulk LiTi2O4. By comparing these four types, the researchers found one — called the TiLi2-terminated surface — that matched their experimental observations. 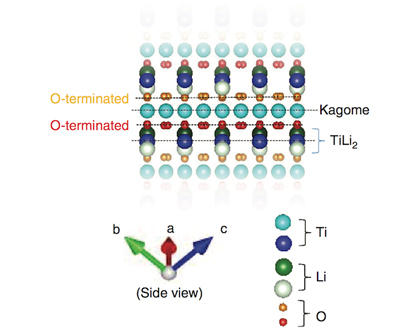 In addition to the superconducting properties, knowing the atomic arrangements could lead to unveiling the mechanisms behind lithium-ion battery operations. The understanding of electrode surfaces is an essential step for designing next-generation lithium-ion batteries with higher capacity, enhanced life cycles and fast charging capabilities, because lithium ions migrate across the electrode surfaces.

As the study provides new directions for interface research, Hitosugi plans to collaborate with Tokyo Tech colleagues now working on solid-state electrolytes, specifically to improve understanding of the electrode–electrolyte interface (EEI), one of the hottest topics in battery research.

“Many people are interested in solid-state batteries — the future of lithium-ion batteries,” he says. “Now that we know the surface atomic arrangement of this material, we can begin to simulate the operation of solid-state lithium batteries.”

1 Spinel: A descriptive term for minerals that crystallise in a cubic (isometric)

2 Pulsed laser deposition: A method used to vaporise the material of interest so that it can be deposited as a thin film on a substrate, which can then be studied under vacuum conditions