Hitachi, Ltd. (TSE: 6501) and Tohoku University’s Advanced Institute for Material Research(AIMR) have developed a basic technology to reduce the internal resistance of the all-solid-state lithium ion battery (Li-ion battery) using a complex hydride*1 as a solid electrolyte. The reduction of internal resistance improves the charge-discharge performance of the all-solid-state Li-ion battery, resulting in the batteries (capacity: 2 mAh) successfully operating at temperatures as high as 150°C with a discharge capacity of 90% of theoretical value*2. This technology is significant as it allows the thermally durable Li-ion battery to be used in a wider variety of applications, such as large-scale industrial machines with motors, and medical machines which need to be heated for autoclave sterilization. Since this technology does not require the cooling system common in conventional Li-ion batteries. It is expected to lead to further developments compact battery systems and reduce the overall costs.

The high energy density Li-ion battery is already being used as power sources in applications such as portable devices (smartphone and tablet), electric vehicles and adjustor of the supply and demand of renewable energy. The conventional Li-ion battery consists of a separator*3,a positive electrode layer, and a negative electrode layer (Fig.1(a)). The battery is filled with organic electrolyte solution in which lithium ion conducts between the two electrode layers during the charge and discharge process. An issue of the conventional Li-ion battery with the organic electrolyte solution is thermal durability. The upper operating temperature was limited to around 60°C owing to volatility of the organic electrolyte solution. Consequently, it is difficult to use the conventional Li-ion battery in a high temperature environment without a cooling system. Therefore, the solid electrolyte with no volatility has been developed for the utilization of Li-ion battery in a high temperature environment. The lithium ion conductivity of solid electrolyte, however, is lower than that of the organic electrolyte solution, and the internal resistance of all-solid-state Li-ion battery should be reduced for its commercialization.
Prof. Shin-ichi Orimo’s lab in AIMR and the Institute for Material Research at Tohoku University has been conducting research on LiBH4-based complex hydrides as novel solid electrolytes. They have confirmed the fast lithium ion conductivity in the wide temperature range from room temperature to 150°C. This research was part of a collaborative project between Hitachi and AIMR has developed the new technology to reduce the internal resistance that is a factor of deterioration of charge-discharge performance. This new technology was validated to yield the battery operation at a temperature as high as 150°C.

Details of the technology developed are as below:

2. Adhesive layer for reducing the interface resistance between solid electrolyte and composite positive electrode layer The other issue is that composite positive electrode layer and the metal hydride complex solid electrolyte layer were delaminated owing to the volume change of the active materials during charge-discharge reaction. This causes the increment of the interfacial resistance by poor lithium ion conduction at the delaminated interface. Therefore, in order to prevent delamination of the interface, amide-added metal hydride complex with a low melting point was developed and placed in the developed battery as an adhesive layer (Fig.1(b)②). As a result, the internal resistance of the all-solid-state Li-ion battery was successfully reduced to 1/100 of the value in the case of no adhesive layer. The discharge capacity was improved up to 90% at 150°C by applying the developed technologies of 1. composite positive electrode layer and 2. adhesive layer (Fig.2). In addition, the degradation of the discharge capacity during charge-discharge cycles was effectively suppressed and the stable charge-discharge of the all-solid-state Li-ion battery was confirmed.

In this research, the battery operation in a high temperature environment of 150°C with a discharge capacity of 90% of theoretical value was confirmed from a prototype of Li-ion battery with the capacity of 2 mAh and the energy density of 30 Wh/L. These are equivalent to 1/1000 and 1/20 of a Li-ion battery used in smartphone. This investigation has verified the fundamental operation of a thermally durable all-solid-state Li-ion battery, and, for practical use, we intend to look into further improving battery capacity, energy density and charge-discharge duration.

This research was part of a project between Hitachi and AIMR called “Collaborative Research for Next Generation Innovative Battery”. The findings of this research will be partially presented on 13th November at The 56th Battery Symposium, which will be held in Aichi Pref. from 11th to 13th November, 2015.

*2 Theoretical value: Maximum amount of electricity which can be storage in the developed battery. The value is determined by the type and amount of active materials, and operating conditions.

*3 Separator: Porous sheet with a thickness of several tens of microns, which composed of electron-insulating polymer material

*5 Discharge capacity: The amount of electricity used in discharge process at the constant current condition of 0.2 mA. 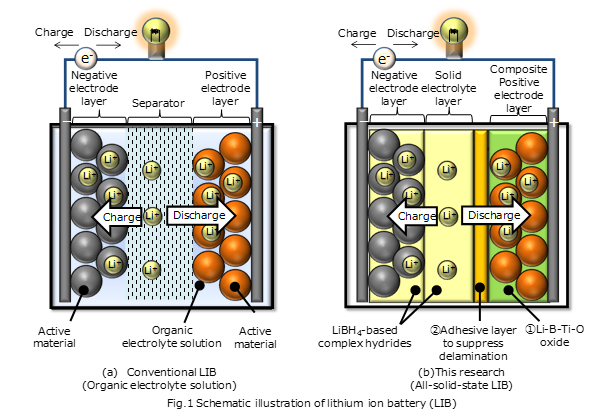 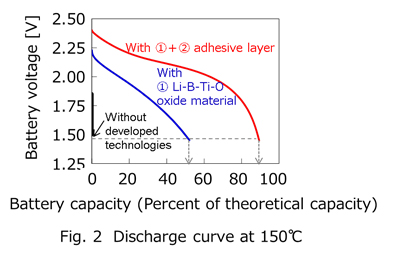