A group of researchers has identified the key stumbling block of a common solid-state hydrogen material, paving the way for future design guidelines and widespread commercial use.

Details of their findings were published in the Journal of Materials Chemistry A, where the article was featured as a Front Cover Article.

Hydrogen will play a significant role in powering our future. It’s abundant and produces no harmful emissions when burned. But the storage and transportation of hydrogen is both costly and risky.

Metal hydrides have long been explored for their large hydrogen storage potentiality and their low cost. As these metals come into contact with gaseous hydrogen, hydrogen gets absorbed onto the surface. Further energy input leads to hydrogen atoms finding their way into the metal’s crystal lattices until the metal becomes saturated with hydrogen. From there, the material can absorb and desorb hydrogen in larger amounts.

Magnesium hydride (MgH2) has shown immense promise for superior hydrogen storage capacity. However, a high temperature is necessary for MgH2 to decompose and produce hydrogen. Furthermore, the material’s complex hydrogen migration and desorption, which result in sluggish dehydrogenation kinetics, have stymied its commercial application.

For decades, scientists have debated why dehydrogenation within MgH2 is so difficult. But now, the research group has uncovered an answer.

Using calculations based on spin-polarized density functional theory with van der Waals corrections, they unearthed a ‘burst effect’ during MgH2’s dehydrogenation. The initial dehydrogenation barriers measured at 2.52 and 2.53 eV, whereas subsequent reaction barriers were 0.12-1.51 eV. 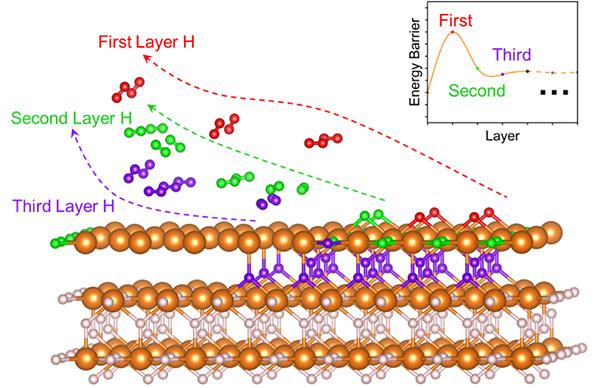 An interesting “burst effect” was found on the dehydrogenation of a typical solid-state hydrogen storage material, MgH2. After the sluggish dehydrogenation at the first layer, hydrogen desorption from the subsequent layers will be much easier. © Hao Li et al.

The group carried out further bond analysis with the crystal orbital Hamilton population method, where they confirmed the magnesium-hydride bond strength decreased as the dehydrogenation process continued.

“Hydrogen migration and hydrogen desorption is much easier following the initial burst effect,” points out Hao Li, Associate Professor at Tohoku University’s Advanced Institute for Materials Research (WPI-AIMR) and corresponding author of the paper. “Structural engineering tweaks that promote this desorption process could be the key to facilitating the hydrogen desorption of MgH2.” 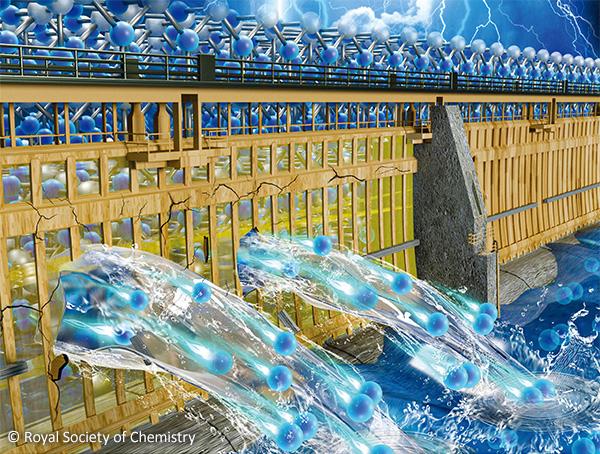 Just like a “dam burst”, the key bottleneck of MgH2 as hydrogen storage material is the first-layer dehydrogenation. © Royal Society of Chemisty