Sea pineapples, an edible ascidian, are a delicacy in Japan. The Tohoku region is famed for its sea pineapple production - known as hoya in Japanese. Now, a research group has established a new use for the scores of sea pineapple shells that get discarded every year.

Led by professor Hiroshi Yabu, the team demonstrated that the carbonization of cellulose nanofibers within sea pineapple shells produces high-quality carbon that, when mixed with blood waste from the livestock industry, boasts electrical performances similar to that of rare metals.

The finding is expected to be applied to next-generation energy devices such as fuel cells, metal-air batteries, and shows the potential to act as the electrocatalyst for water electrolysis systems.

The oxygen reduction reaction is crucial for energy devices. The cathode in these devices often employs platinum and iridium oxide as the electrocatalyst, but these are rare-earth materials, rendering them expensive.

Scientists have explored alternative carbon sources, but these involve substantial CO2 emissions. Yabu and his group have shown this process can be both sustainable and metal-free.

Livestock blood contains large amounts of heme iron, nitrogen, and phosphorus. Despite this, the livestock industry disposes of thousands of tons of dry blood waste each year, polluting rivers, lakes, and water streams.

“In Japan, blood waste has been used as a bleaching agent since ancient times,” points out Yabu. “This is due to the adsorption function of carbon and the catalytic effect of the hereto-elemental components.”

Meanwhile, cellulose nanofibers, which are widely employed as reinforcement for polymer materials, have highly crystalline structures that give them optimal mechanical and thermal properties. Cellulose nanofibers traditionally come from wood biomass, but the research team identified sea pineapples on account that they, along with other marine organisms, exhibit greater crystallinity and produce remarkable graphitic structures when heated at high temperatures. 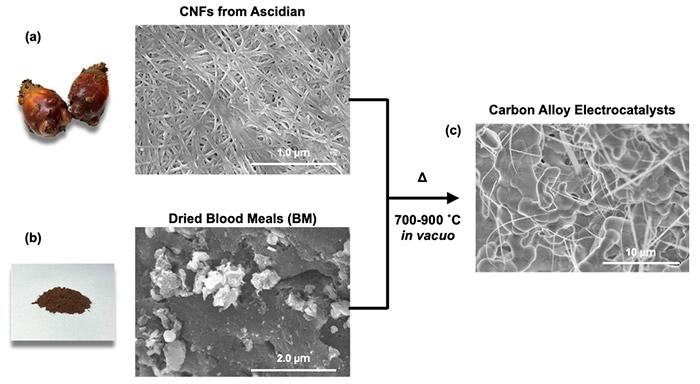 The blood mass and cellulose nanofibers were mixed before being heated. From there, powder-like carbon alloys were obtained and analyzed.

Details of the study were published in the journal Science and Technology of Advanced Materials.

Yabu is confident that the discovery will lead to a greener society and a more sustainable future. “We could utilize two industrial waste products - ones that have historically been difficult to dispose of - and applied them to produce green hydrogen.”