Their discovery was published in the journal Nature Materials on May 13, 2021.

TU and JAEA researchers studied the response of chiral-spin structure of a non-collinear antiferromagnet Mn3Sn thin film to electron spin injection and found that the chiral-spin structure shows persistent rotation at zero magnetic field. Moreover, their frequency can be tuned by the applied current.

“The electrical control of magnetic structure has been of paramount interest in the spintronics community for the last quarter of a century. The phenomenon shown here provides a very efficient scheme to manipulate magnetic structures, offering new opportunities for application, such as oscillators, random number generator, and nonvolatile memory,” said Professor Shunsuke Fukami, who spearheaded the project.

Figure 1 compares the efficiency of manipulating the magnetic structure on a non-collinear antiferromagnet, as seen in the present work, with those reported for other material systems. The current-induced chiral-spin rotation is much more efficient even for thick magnetic layers above 20 nm. 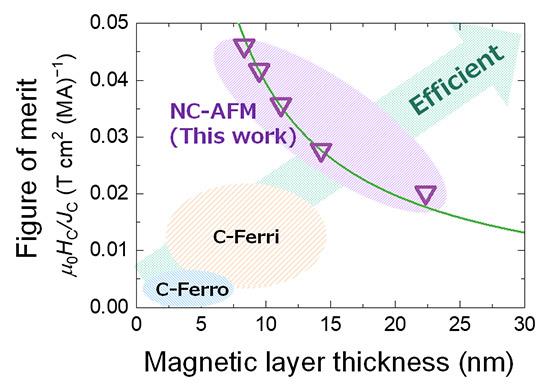 Fig. 1: A figure of merit, defined as the ratio of critical field H¬C to critical current density JC to manipulate magnetic structure, as a function of magnetic layer thickness for non-collinear antiferromagnet (NC-AFM) studied here as well as collinear ferromagnet (C-Ferro) and ferrimagnet (C-Ferri) studied previously.

The schematics of chiral-spin rotation as well as the experimental setup are shown in figure 2. 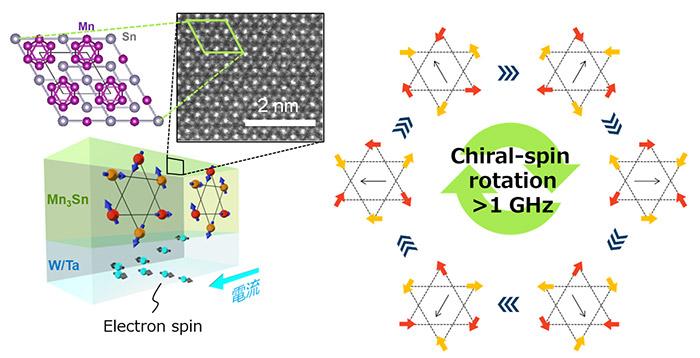 Fig. 2: A schematic of experiment and chiral-spin persistent rotation found in this study.

The researchers used a high-quality heterostructure consisting of non-collinear antiferromagnet Mn¬3Sn sandwiched between heavy metals W/Ta and Pt. They revealed that, when a current is applied to the heterostructure, the chiral-spin structure rotates persistently at zero magnetic field because of the torque originating from the spin current generated in the heavy metals. Meanwhile, the rotation frequency, typically above 1 GHz, depends on the applied current.

Spintronics is an interdisciplinary field, where electric and magnetic degrees of freedom of electrons are utilized simultaneously, allowing for an electrical manipulation of magnetic structure. Representative schemes established so far are summarized in figure 3. 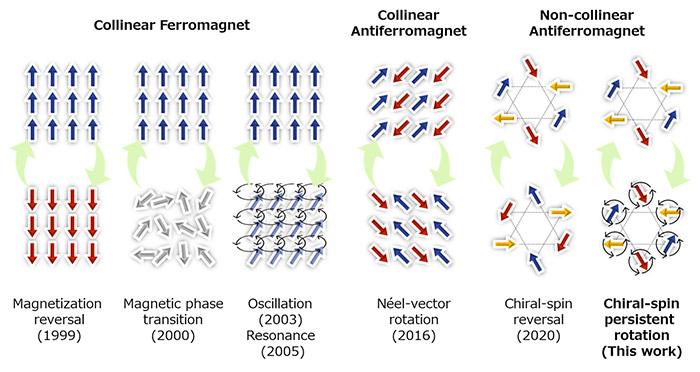 Magnetization switching, magnetic-phase transition, oscillation, and resonance have been observed in ferromagnets, which are promising since they may lead to the realization of functional devices in nonvolatile memory, wireless communication, and so on.

Additionally, in antiferromagnets, the 90-degree rotation of Néel vector in collinear systems and the 180 degree switching of chiral-spin structure in non-collinear systems have been observed recently. The chiral-spin persistent rotation in the current work is totally different from all the previously found phenomena and thus should open a new horizon of the spintronics research.

“The obtained insight is not only interesting in terms of physics and material science but also attractive for functional device applications,” added Dr. Yutaro Takeuchi, the first author of the paper. “We would like to further improve the material and device technique in the near future and demonstrate new functional devices such as tunable oscillator and high-quality true random number generator.”