The human brain efficiently executes highly sophisticated tasks, such as image and speech recognition, with an exceptionally lower energy budget than today’s computers can. The development of energy-efficient and tunable artificial neurons capable of emulating brain-inspired processes has, therefore, been a major research goal for decades.

Researchers at the University of Gothenburg and Tohoku University jointly reported on an important experimental advance in this direction, demonstrating a novel voltage-controlled spintronic microwave oscillator capable of closely imitating the non-linear oscillatory neural networks of the human brain.

The research team developed a voltage-controlled spintronic oscillator, whose properties can be strongly tuned, with negligible energy consumption. “This is an important breakthrough as these so-called spin Hall nano-oscillators (SHNOs) can act as interacting oscillator-based neurons but have so far lacked an energy-efficient tuning scheme – an essential prerequisite to train the neural networks for cognitive neuromorphic tasks,” proclaimed Shunsuke Fukami, co-author of the study. “The expansion of the developed technology can also drive the tuning of the synaptic interactions between each pair of spintronic neurons in a large complex oscillatory neural network.”

Earlier this year, the Johan Åkerman group at the University of Gothenburg demonstrated, for the first time, 2D mutually synchronized arrays accommodating 100 SHNOs while occupying an area of less than a square micron. The network can mimic neuron interactions in our brain and carry out cognitive tasks. However, a major bottleneck in training such artificial neurons to produce different responses to different inputs has been the lack of the scheme to control individual oscillator inside such networks. 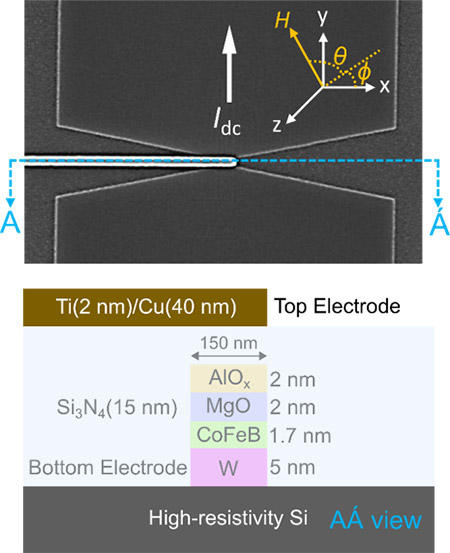 Figure 1: Scanning electron microscopy image and schematic of cross-sectional structure of the created spin-Hall nano-oscillator device with the gate electrode.

The Johan Åkerman group teamed up with Hideo Ohno and Shunsuke Fukami at Tohoku University to develop a bow tie-shaped spin Hall nano-oscillator made from an ultrathin W/CoFeB/MgO material stack with an added functionality of a voltage controlled gate over the oscillating region [Fig. 1]. Using an effect called voltage-controlled magnetic anisotropy (VCMA), the magnetic and magnetodynamic properties of CoFeB ferromagnet, consisting of a few atomic layers, can be directly controlled to modify the microwave frequency, amplitude, damping, and, thus, the threshold current of the SHNO [Fig. 2].

The researchers also found a giant modulation of SHNO damping up to 42% using voltages from -3 to +1 V in the bow-tied geometry. The demonstrated approach is, therefore, capable of independently turning individual oscillators on/off within a large synchronized oscillatory network driven by a single global drive current. The findings are also valuable since they reveal a new mechanism of energy relaxation in patterned magnetic nanostructures.

Fukami notes that “With readily available energy-efficient independent control of the dynamical state of individual spintronic neurons, we hope to efficiently train large SHNO networks to carry out complex neuromorphic tasks and scale up oscillator-based neuromorphic computing schemes to much larger network sizes.”