Probabilistic computing using probabilistic bits, or p-bits, whose state fluctuates in time between 0 and 1 has analogies to quantum computing that uses superposition of 0 and 1 of quantum bits, or q-bits. The research group developed a spintronics-based p-bit with a stochastic magnetic tunnel junction (s-MTJ) (Fig. 1) and constructed a rudimentary probabilistic computer inspired by concepts from asynchronous neural networks. Using the developed spintronics probabilistic computer, integer factorization was tested as an illustrative example of optimization problems (Fig. 2). For the operation, a modified algorithm of quantum annealing was applied and up to 4-body interactions were implemented. They succeeded in factorizing 35 into 5 and 7 by 4 p-bits, 161 into 23 and 7 by 6 p-bits, and 945 into 63 and 15 by 8 p-bits.

Quantum computing is expected to efficiently execute difficult classes of problems such as optimization that classical computers cannot address efficiently. Whereas most q-bits operate at extremely low temperature and often interact only with neighboring q-bits, the spintronics p-bits can be used like q-bits but operating at room temperature with the ability to correlate, by electrical means, with multiple p-bits even at long distances. In addition, spintronics p-bits can be realized by slightly modifying a matured nonvolatile memory (Magnetoresistive Random Access Memory; MRAM) technology (Fig. 3), whose integration densities are well above the megabit range. In this sense, the developed p-bit can be regarded as a “Poor-man’s q-bit”.

The demonstrated computing scheme based on spintronics technology is particularly attractive for certain classes of problems where approximate solutions are acceptable, because the probabilistic computer makes use of natural stochasticity of s-MTJ instead of introducing it artificially into a deterministic computer. Compared with quantum computers, the spintronics probabilistic computers are attractive in terms of room-temperature operation, ease of implementing many-body interactions, and maturity of fundamental technology in the MRAM community. In this context, the results shown are promising in that they pave an unexplored pathway towards a new computing paradigm that is particularly well-suited for certain classes of problems like optimization and thus is useful in areas such as drug research, encryption and cybersecurity, financial services, data analysis, and supply chain logistics. 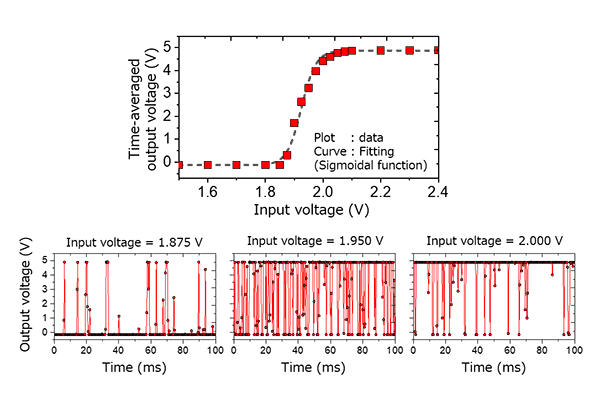 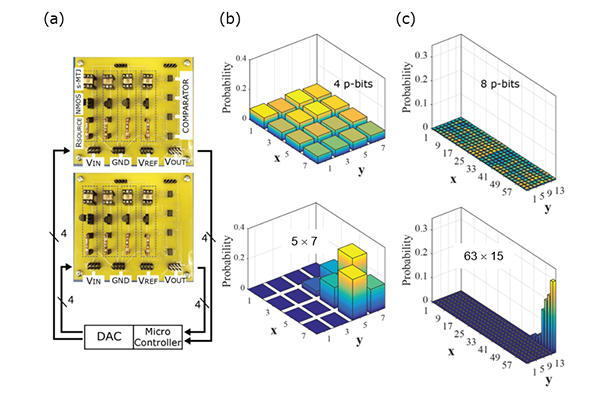 Fig. 2: (a) Block diagram and photograph of the developed probabilistic computer. (b) and (c) show the results of integer factorization using 4 and 8 p-bits for 35 and 945, respectively. The Upper/lower panels show the probability at an uncorrelated/correlated state. At the correlated state, where the system is capable of factorization, prominent peaks are observed for correct factors of 5 and 7 for (b) and 63 and 15 for (c). © Shunsuke Fukami and Kerem Camsari 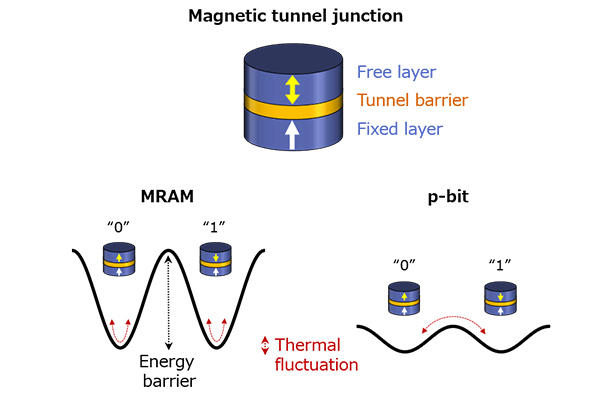 Fig. 3: The structure of a magnetic tunnel junction and the design of the energy barrier for MRAM and p-bit applications. The magnetic tunnel junction consists of ferromagnetic free and fixed layers which sandwich a thin insulating tunnel barrier. The direction of the free-layer magnetization, representing the digital information 0 and 1, can be changed by external electric input. For MRAM applications, the energy barrier between 0 and 1 states is designed to be large relative to the thermal fluctuation, whereas, for p-bit application, it is designed to be close to the level of thermal fluctuation such that the magnetization fluctuates in time. © Shunsuke Fukami and Kerem Camsari