Applying large enough magnetic fields usually results in the disruption of superconducting states in materials, even at drastically low temperatures. This thereby changes them directly into insulators – or so was generally thought. Now, scientists from the Tokyo Institute of Technology, The University of Tokyo and Tohoku University have discovered the interesting occurrence of multi-state transitions of superconductors – going from superconductor, to special metal, and then to insulator.

This phenomenon has been intensively studied under the framework of phase transition. When the change is abrupt like in the case of melting ice, it is called the first-order transition. In contrast, when the transition takes place in a gradual and continuous manner, it is called the second-order transition. Studying the transition path of superconductors under a magnetic field yields insights into the quantum processes involved. Furthermore, it enables us to design smarter superconducting materials and devices for advanced technologies.

Two-dimensional superconductors (2DSCs) such as mono layer NbSe2 are the best candidates to study the process of phase transitions. The very thin nature of mono layer film constrains the inside electrons to form a pair with a limited number of counterparts, so that even a small perturbation can triger the phase transition. Furthermore, 2DSCs have a high potential for applications to small-scale electronics.

In 2DSCs, when we apply a magnetic field beyond the critical value, the material enters into a fuzzy state, where the magnetic field penetrates the material, but the resistance still remains minimal. Upon further increasing the magnetic field, the superconductivity is finally destroyed and the material changes to an ordinary insulator. This is known as the superconductor-to-insulator phase transition. Because this phenomenon is observed at very low temperatures, the quantum fluctuations in the material become comparable to or even larger than the classical thermal fluctuations. Therefore, this is called a “quantum” phase transition.

To understand the path-phase transition as well as the fuzzy or mixed state in ultrathin NbSe2, the present team measured the magnetoresistance of material (see Fig. 1), namely, the response of electrical resistivity under an external magnetic field. Prof. Ichinokura explains, “As shown in Fig. 2, we estimated the critical magnetic field at the respective quantum phase boundaries in mono-layer NbSe2 by the four-point-probe method”. In fact, they found that when a small magnetic field is applied to the sample, the coherent flow of electrons is broken, but the electron pairs seem to still remain. This indicates that the vortices still move even under the magnetic field and create a finite resistance. This peculiar (fuzzy) state with a minimal resistance is called the Bose metal state, where electron pairs do exist in material, but the coherence among them is lost. Upon further increase of the magnetic field, the material enters into an insulating state. The team also found that the transition between the normal and superconducting states around the critical temperature was driven by quantum fluctuations, reflecting a similar multi-transition pathway. Excited by the results, Prof. Ichinokura commented, “The scaling analysis based on the Bose-metal model explains well the two-step transition, indicating the existence of bosonic ground state.” 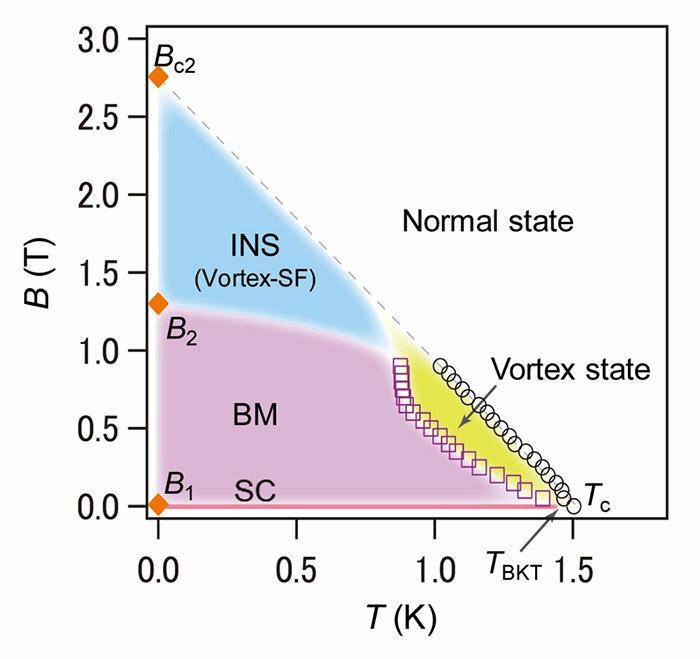 
Satoru Ichinokura
Department of Physics, The University of Tokyo, Japan