A new way to deliver a force to drive micro mechanics

Micro mechanical elements are indispensable components of modern electrical devices but the actuation of them requires electrical current. It becomes harder to wire the element as further downscaling of device is pursued. As a way out of this issue, researchers demonstrated a new way to deliver a force to drive micro mechanics by spin current.

Spin current is a flow of electron angular momentum in matters. The spin current has been used as a new information carrier in the context of spintronics such as hard disk drives (HDD) head and Magnetic Random-Access Memory (MRAM). In this context, the injection of spin current can control the orientation of micro magnets by exerting magnetic torque.

“This driving mechanism of micro machines does not require an electrical wiring on it.” Kazuya Harii, a researcher at ERATO Saitoh Spin Quantum Rectification Project, said. “This mechanism is applicable to any mechanical objects in micro and nano meter scales.” 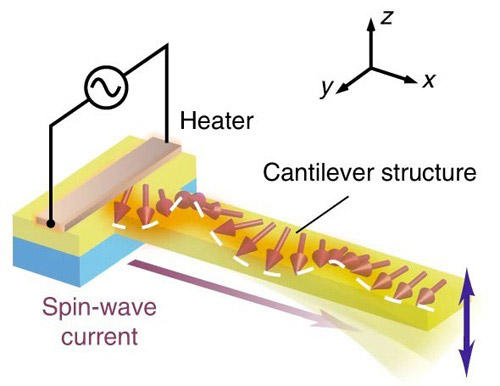 A schematic illustration of the sample used in the present study

The sample consists of a cantilever made of Y3Fe5O12(YIG) connected to an edge of a YIG film and a heater placed on the YIG film around the root of the cantilever. An electric current applied to the heater generates heat, which flows across the YIG film and the GGG substrate toward the sample holder. The heat current creates spin-wave (magnon) accumulation at the surface and the bottom of the YIG film. The accumulation injects spin current into the YIG cantilever connected around the surface of the film. ©Kazuya Harii

Eiji Saitoh, The University of Tokyo