Tohoku University researchers have improved on currently available methods for screening drugs for heart-related side effects.

The method involves fabricating a tiny hole in a silicon chip over which lipid membranes, similar to those that surround cells, are encouraged to grow. An ion channel is then synthesized separately and knocked into the membrane during centrifugation.

Ion channels are pores made of proteins that exist in some cell membranes, like in cardiac muscle cells. They open and close to allow ions to pass through, creating an electrical signal. Some drugs have side effects by acting on these ion channels. The antihistamine astemizole, for example, which has now been withdrawn from the US market, can shut down a potassium ion channel involved in regulating the heartbeat. Taking it could lead to irregular palpitations.

Scientists have been investigating ways to screen drugs for side effects on ion channels. Currently available methods are imperfect. In one method, stem cells are directed to transform into cardiac muscle cells that have the specific type of ion channel being targeted for drug testing. This method, however, is tedious and can take up to 90 days of preparation. Other, less time-consuming methods involve inserting ion channels into artificially formed lipid membranes covering a small hole made in a micro- or nano-sized chip. But current methods lead to the formation of unstable membranes, reducing their efficiency during experiments. 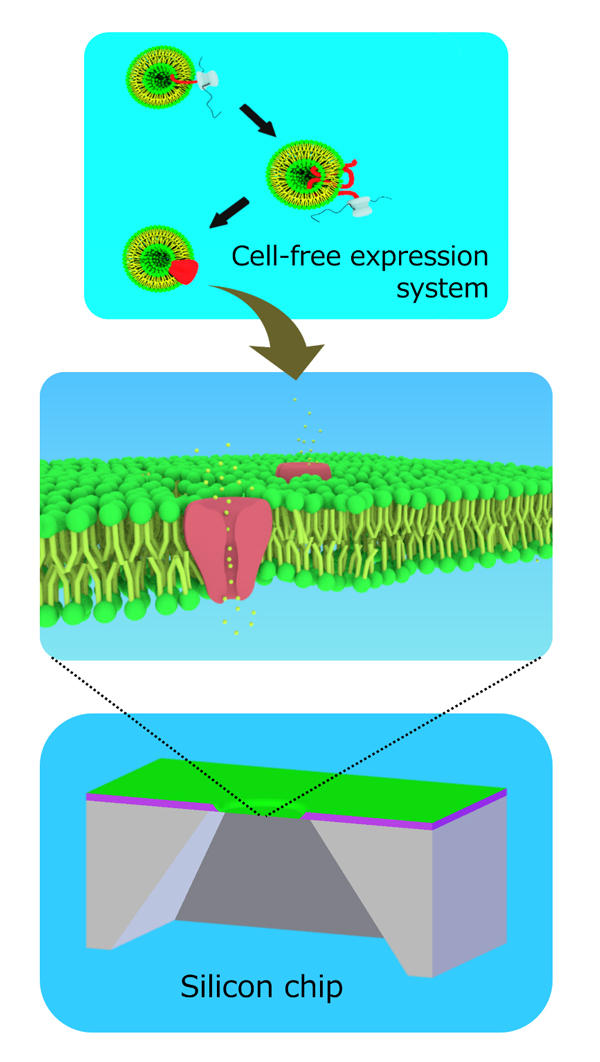 Each chip was made of a thick layer of silicon covered by a thin layer of silicon nitride, followed by a thin layer of silicon oxide. In a series of steps, the central part of the chip was etched away to create a tiny hole. The shape of the hole varied very slightly depending on the type of acid used to dissolve the material. The team found the hole that provided the most stability for lipid membranes to form over it had a gradually tapering edge. A larger percentage of membranes remained attached to the tapering edge during centrifugation (45%) and when small forces were applied to them (75%), compared to those attached to the two other holes (from 0% to 20%).

The team added a cell-free synthesized cardiac muscle ion channel, called hERG, to the membranes by centrifugation. They succeeded in detecting electrical currents from the channels and in blocking the currents by administering the drug astemizole, which has a well-recognized adverse effect on hERG channels in the heart.

Their approach has the potential "to serve as a new screening platform for assessing the potential risks of drug side effects acting on hERG channels of patients," the researchers conclude in their study published in the journal Scientific Reports.