These common, abundant materials, sometimes even associated with waste, are not often thought of as being electronically or magnetically interesting. But an international research team, led by Professor Kosmas Prassides of Tohoku University in Japan and Professor Matthew J. Rosseinsky of the University of Liverpool in the U.K., has made a significant find.

The team recently discovered how to take such hydrocarbon molecular components, dress them with electrons, each of which carries a small compass – an unpaired spin – and pack them together like cookies in a box to create a quantum spin liquid – a long-sought hypothetical state of matter.

It was in 1973 that the existence of quantum spin liquids was first theoretically proposed. In conventional magnets, the motion of the electron spins – the tiny magnets – freezes on cooling as they align parallel or antiparallel to each other (Fig. 1 left). In contrast, the spins in a quantum spin liquid never stop fluctuating, randomly and strongly, even at the lowest temperature of absolute zero. Each individual spin points simultaneously along an infinite number of directions and is highly entangled with other spins, even those far away (Fig. 1 right). As such, this sea of electron spins is predicted to be host to many exotic phenomena of both fundamental and technological interest.

However, experimental realization of this unique fully-entangled state of matter has remained to date unfulfilled. Despite a four-decade-long search, there are very few quantum spin liquid candidates. Current options include certain copper inorganic minerals and some organic salts, which contain rare, heavy or toxic elements.

In results published in two back-to-back papers on April 24 in the British scientific journal Nature Chemistry, the team came up with the new chemistry needed to make high-purity crystalline materials from the reaction of polyaromatic hydrocarbons (Fig. 2) with alkali metals for the first time.

Materials obtained from polyaromatic hydrocarbons (molecules with many aromatic rings) were proposed in the past as candidates of new superconductors – materials with no electrical resistance and able to carry electricity without losing energy – devoid of toxic or rare elements. However, destruction of the molecular components in the synthetic treatments employed had inhibited any progress in this field.

“Removing the existing synthetic roadblock has led to very exciting developments,” says Professor Kosmas Prassides. “We have already discovered that some of the structures of the new materials – made entirely of carbon and hydrogen, the simplest possible combination – show unprecedented magnetic properties – spin liquid behavior (Fig. 3) – with potential applications in superconductivity and quantum computing.”

“It took us many years of work to achieve our breakthrough,” adds Professor Matthew Rosseinsky. “But in the end, we succeeded in developing not one, but two complementary chemistry routes, which open the way to a rich variety of new materials with as-yet unknown properties.”

The Tohoku/Liverpool groups worked with teams led by Dr Ryotaro Arita (RIKEN, Japan) and Professor Denis Arcon (University of Ljubljana, Slovenia). The research was supported by the Mitsubishi Foundation, JSPS KAKENHI, JST-ERATO Isobe Degenerate π-Integration Project, the European Union and the Engineering and Physical Sciences Research Council (UK). Part of the research was carried out at the synchrotron X-ray facilities at the European Synchrotron Radiation Facility (France) and Diamond Light Source (UK). 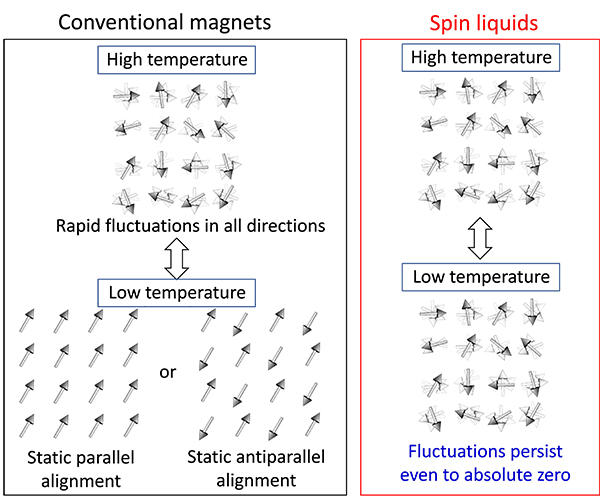 Fig. 1 Differences between ordinary magnets and spin liquids. At high temperatures, the spins – the little compasses of each unpaired electron in the materials – fluctuate randomly between arbitrary orientations in both cases. (Left) In conventional magnetic states, the spins order statically aligning relative to each other either in parallel or antiparallel fashion below some characteristic temperature. (Right) In a quantum spin liquid, the spins never order at any temperature, no matter how low it is – they continue to fluctuate rapidly without symmetry breaking even at absolute zero temperature (−273°C).
© 2017 Kosmas Prassides 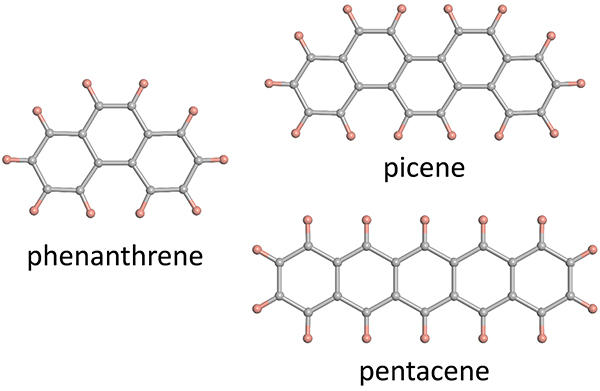 Fig. 3 Diagrammatic representation of the structure of the ionic hydrocarbon discovered in this work as host of a quantum spin liquid. The left panel shows the molecular ions, which arrange in triangular vertex-sharing chains. The right panel depicts the co-existing spiral magnetic tubes. The two structural motifs interlink to give a complex packing architecture, as shown in projection in the middle panel. Each molecular ion has one spin (shown as grey arrow). The spins perpetually fluctuate down to low temperatures. The figure shows one of an infinite number of entangled spin arrangements.
© 2017 Kosmas Prassides