A research group at Tohoku University's WPI-AIMR has succeeded in finding the origin and the mechanism of ferromagnetism in Mn-doped GaAs. The discovery is significant as it will accelerate the development of the spintronic element.

GaAs, like silicon, is a well-known semiconductor commonly used in high-speed electronic devices and laser diodes.

When manganese (Mn) atoms are doped into a GaAs crystal ((Ga,Mn)As), the crystal exhibits characteristics and properties of both the semiconductor and magnet (Fig. 1). Since it is possible to use an electric field to control the magnetism in (Ga,Mn)As, Mn-doped GaAs has been a key material in spintronic devices and a significant contributor to the development of spintronics technology.

However, although it has been 20 years since that discovery, the mechanism of ferromagnetism in (Ga,Mn)As is still not widely understood or well explained. There remains fierce debate and confusion, leading to obstacles preventing the progress and further development of spintronics technology.

The researchers at Tohoku University, led by Profs. H. Ohno and T. Takahashi, have succeeded in directly observing the electronic states which participate in creating the ferromagnetism by photoemission spectroscopy. They found that doped Mn atoms extract electrons from As atoms, leaving "holes" (empty states of electrons) in the As orbital. This then causes the ferromagnetism in (Ga,Mn)As (seen in Fig. 2).

"This finding resolves the long-standing problem in the mechanism of ferromagnetism in (Ga,Mn)As," says researcher Seigo Souma. "It also accelerates the materials engineering of magnetic semiconductors, as well as the tunable controlling of spin states in spintronic devices. This is very significant result and we're excited about the potential it represents." 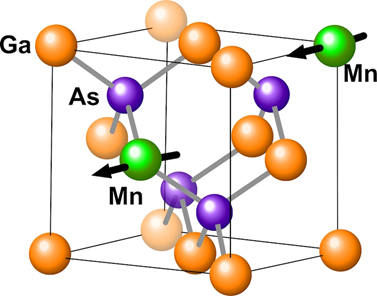 Fig.1: Crystal structure of (Ga,Mn)As. Mn ions substituted for Ga have a magnetic moment, and the magnetic moment of each Mn ion aligns along the same direction when (Ga,Mn)As becomes a ferromagnet. 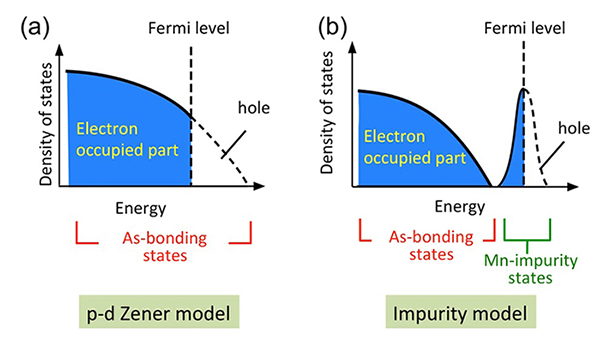 Fig.2: Two conflicting mechanisms to explain the origin of magnetism in (Ga,Mn)As. The p-d Zener model (a) explains that the ferromagnetism of (Ga,Mn)As is mediated by hole carriers generated in the As-bonding state. On the other hand, the impurity model (b) assumes a different hole character in the newly formed Mn-impurity state located above the As-bonding state. The present study has revealed that the p-d Zener model is a correct description to explain the ferromagnetism of (Ga,Mn)As.