The new technology, known as the spin Seebeck effect *2, has conversion efficiency 10 times higher than the conventional method *3.

Thermoelectric conversion technology that converts energy abandoned as waste heat back to electric power could potentially save energy and reduce greenhouse gas emissions. Although conventional spin Seebeck thermoelectric devices have the advantage of low manufacturing costs and high versatility and durability, their energy conversion efficiency is inferior.

"We have improved the conversion efficiency of this spin Seebeck thermoelectric device by more than 10 times because of its newly developed material and device structure," says Soichi Tsumura, General Manager, IoT Device Research Laboratories, NEC Corporation. "Furthermore, devices made of flexible material, such as resin, have been achieved using a manufacturing process that does not require high-temperature heat treatment."

"The conversion efficiency of this new spin thermoelectric device has been improved by almost one million times when compared to the earliest device, and has taken an important step towards practical use as a generator element. The achievement of practical use as a heat flux sensor is also in sight," says Tsumura.

The three parties aim to further the research and development of technologies to generate electricity from the large amount of waste heat emitted by things such as plants, data centers and vehicles.

These results were achieved as part of the "Saitoh Spin Quantum Rectification Project" led by Tohoku University Professor Eiji Saitoh. It is funded by the Exploratory Research for Advanced Technology (ERATO) program of the Japan Science and Technology Agency (JST). 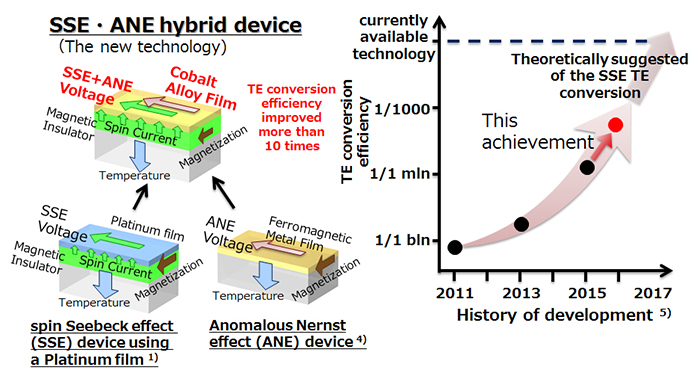 Development of a low-cost, high-performance ferromagnetic alloy and significant improvement in thermoelectric conversion efficiency
Conventionally, expensive platinum was used as the electrode material to extract electric power in a spin Seebeck thermoelectric device. This time, new cobalt alloys were developed to replace the platinum. As a result, the cost was significantly reduced. Furthermore, the combination of the thermoelectric effect termed the "Anomalous Nernst Effect," *4 appearing due to the ferromagnetic properties added to the cobalt alloys and the spin Seebeck effect, have improved the thermoelectric conversion efficiency by more than 10 times. 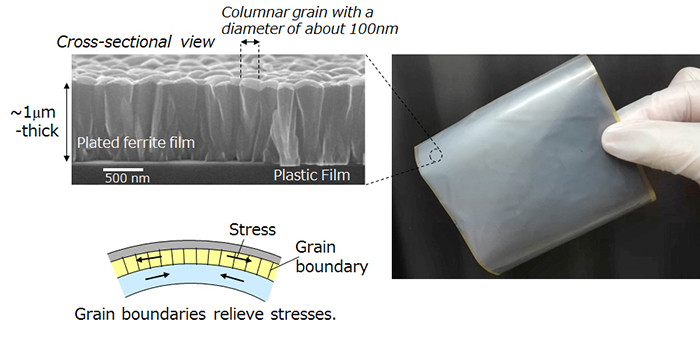 Devices with bending resistance and low heat treatment temperature achieved by new deposition technology
New deposition technology fabricates a fine ferrite film for spin Seebeck thermoelectric devices at 90°C, much lower than the 700°C used with the conventional method. Owing to the decrease in heat treatment temperature, elements can be created on the surface of plastic film, etc., and flexible devices of various shapes are created.

*1 The Spin Seebeck effect is a thermoelectric effect discovered in 2008 by Prof. Eiji Saitoh and Associate Prof. Ken-ichi Uchida of Tohoku University (Keio University at that time). This is a phenomenon in which a temperature gradient applied in a magnetic material produces a spin current along the temperature gradient. The spin current is a flow of a magnetic property of an electron, so-called "spin".

*2 A thermoelectric device is a device which converts thermal energy directly into electricity and vice versa.

*3 Compared with a test module that was produced based on a multi-layered SSE technology published by the Tohoku University group in 2015.

*4 The anomalous Nernst effect is a thermoelectric effect discovered about 100 years ago, which relates to the magnetic property of a conductive material.