The central issue of the MRAM development is how to achieve magnetization reversal efficiently.

Recently, spin-orbit torque (SOT)-induced magnetization switching - where torques brought about by an in-plane current through the spin-orbit interactions are utilized - was demonstrated and intensively studied. In principle, the SOT-induced switching allows for an ultrafast magnetization reversal in a nanosecond timescale.

The research group of Tohoku University showed a new scheme of SOT-induced magnetization switching. Whereas there had been two kinds of switching schemes where the magnetization is directed orthogonally to the applied write current, the present structure has the magnetization directing collinear with the current. The group fabricated three-terminal devices with the new structure, where a Ta/CoFeB/MgO-based magnetic tunnel junction is used, and successfully demonstrated the switching operation.

The required current density to induce the magnetization switching was reasonably small and the resistance difference between “0” and “1” states was reasonably large, indicating that the new structure is a promising candidate for the MRAM applications.

In addition, the group showed that the new structure has the potential to serve as a useful tool to go deeply into the physics of SOT-induced switching, in which a number of unrevealed issues remain.

The magnetic memory device can store the information without power supply, allowing a drastic reduction of the power consumption of integrated circuits. In particular, this benefit becomes significant for applications that have relatively long standby times, such as sensor nodes which are likely to perform important roles in future IoT (Internet of Things) societies.

In this regard, the present work is expected to pave the way toward the realization of ultralow-power and high-performance integrated circuits and IoT societies. 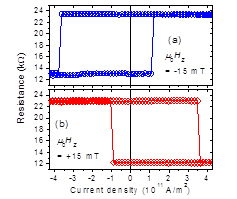