This configuration enabled researchers to demonstrate that the electronic architecture at the interconnection points between two GNRs (Fig. 1b) is the same as that along single GNRs; evidence that GNR electronic properties, such as electron and thermal conductivities, are directly extended through the elbow structures upon chemical GNR interconnection.

This work shows that future development of high-performance, low-power-consumption electronics based on GNRs is possible.

Graphene has long been expected to revolutionize electronics, provided that it can be cut into atomically precise shapes that are connected to desired electrodes. However, while current bottom-up fabrication methods can control graphene’s electronic properties, such as high electron mobility, tailored band gaps and s pin-aligned zigzag edges, the connection aspect of graphene structures has never been directly explored. For example, whether electrons traveling across the interconnection points of two GNRs would encounter higher electric resistance remains an open question. As the answers to this type of questions are crucial towards the realization of future high-speed, low-power-consumption electronics, we use molecular assembly to address this issue here.

To reach this goal, the AIMR team used a Cu substrate, whose reactivity confines the GNR growth to six directions, and used scanning tunneling microscopy (STM) to visualize the GNR electronic structures. By controlling the precursor molecular coverage, this molecular assembly connects GNRs from different growth directions systematically end to end, producing elbow structures—identified as interconnection points (Fig. 1a). Using STM, the AIMR team revealed that the delocalization of the interconnected GNR π*-states extends the same way both across a single straight GNR, and across the interconnection point of two GNRs (periodic features in Fig. 1b, bottom panel). This result indicates that GNR electronic properties, such as electron and thermal conductivities, should be the same at the termini of single GNRs and that of two connected GNRs.

“The major finding of this work is that interconnected GNRs do not show electronic disruption (e.g., electron localization that increases resistance at the interconnection points),” says Han. “The electronically smooth interconnection demonstrates that GNR properties (including tailored band gaps, or even spin-aligned zigzag edges) can be connected to other graphene structures. These results show that finding a way to connect defect-free GNRs to desired electrodes may be the key strategy toward achieving high-performance, low-power-consumption electronics.” 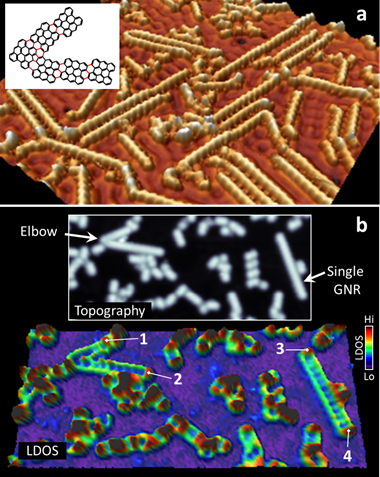