The research group of Professor Hideo Ohno and Associate Professor Shunsuke Fukami of Tohoku University has studied in detail, a slow change of microscopic magnetic structures in metallic wires induced by external driving forces, commonly called "creep" motion. This has allowed them to clarify the physics of how the driving forces, magnetic fields or electric currents, act on the magnetic structure.

Previous studies had shown that while the actions of magnetic fields and currents are the same for metallic materials, they are fundamentally different for semiconductor materials.

The present study reveals that in cases where the sample satisfies a certain condition, the current acts on the magnetic structure in a different manner from the magnetic field case, irrespective of the intricacies of the material.

The development of a high-performance magnetic memory device (where the magnetic structure is manipulated by current) has been intensively pursued recently, and the present findings are expected to facilitate the fundamental understanding to achieve the practical application.

The research group fabricated a wire device consisting of a ferromagnetic metal CoFeB, and investigated the universality class of a magnetic domain wall "creep". They evaluated the domain wall velocity for various magnitudes of magnetic field or electric current while keeping the device temperature constant, from which they derived the scaling exponent for the universality class.

The results indicate that the scaling exponent does not depend on factors such as temperature and wire width, for both magnetic field and current cases, confirming the universality of the observed feature. Interestingly, unlike the previous study on metallic systems, they found different universality classes between magnetic field and current-driven domain wall creeps in the present metallic sample.

This means that the actions of a magnetic field and current on the domain wall are fundamentally different from each other. The field-driven "creep" was found to belong to a previously known universality class, whereas the current-driven "creep" was found to belong to a different universality class which cannot be explained by the present theories and the scaling exponent was similar to the one observed previously in the magnetic semiconductor.

From detailed investigations of the behavior of the domain wall under the application of a current, they found that the current gives rise to an adiabatic spin-transfer torque acting on the domain wall which has a different symmetry to the torque induced by a magnetic field. In other words, it was clarified that, for sample in which stack structure is designed so that the adiabatic spin-transfer torque dominantly affects the domain wall, universal creep characteristics appear irrespective of the nature of material, such as metal or semiconductor, the details of microscopic structure.

The obtained findings shed light on a statistical physics of creep motion of elastic interfaces and development of high-performance magnetic memory devices.

This work is supported by the R&D Project for ICT Key Technology to Realize Future Society of MEXT, R&D Subsidiary Program for Promotion of Academia-Industry Cooperation of METI and ImPACT Program of CSTI. 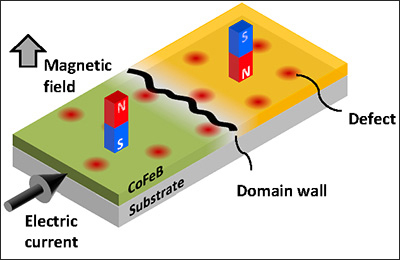 Fig. 1: Schematic of domain wall creep. When a very weak magnetic field or electric current is applied to the magnetic wire with domain wall, the domain wall behaves as an elastic interface and slowly moves, creeps. 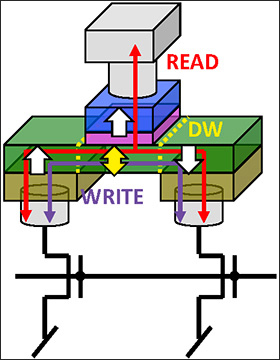 Fig. 2: Schematic of a three-terminal memory device with current-induced domain wall motion. To write the information, current is applied to magnetic wire having domain wall (DW) to drag it.