How to maximize the Tc in a molecular superconductor

An international research team, led by Professor Kosmas Prassides of Tohoku University, has investigated the electronic properties of the family of unconventional superconductors based on fullerenes*1 which have the highest known superconducting critical temperature (Tc) among molecular superconductors*2.

In results published in the American scientific journal Science Advances, the team was able to demonstrate the guiding influence of the molecular electronic structure in controlling superconductivity and achieving the maximum Tc, opening the way to new routes in the search of new molecular superconductors with enhanced figures of merit.

Most superconductors have simple structures built from atoms. But recently, superconductors made from molecules arranged in regular solid structures have been found.
Work by members of the team on molecular fulleride-based systems has previously led to the discovery of the highest working temperature (at 38 K) for a molecular superconductor (Nature Materials 7, p. 367, 2008).

The electronic ground state, which is in competition with superconductivity, was found to be magnetically ordered (Science 323, p. 1585, 2009). And the zero-resistance superconducting state could be switched on by tuning the exact arrangement of the C60 molecules in the solid by external pressure (Nature 466, p. 221, 2010).

The controlling role of the molecular electronic structure was then identified by demonstrating that the parent insulating state involves Jahn-Teller distortion*3 of the molecular anions that produces the magnetism from which the superconductivity emerges (Nature Communications 3, 912, 2012).

The research team has addressed for the first time the relationship between the parent insulator, the normal metallic state above Tc and the superconducting pairing mechanism in a new family of chemically-pressurized fullerene materials. This is a key question in understanding all unconventional superconductors including the high-Tc cuprates, the iron pnictides and the heavy fermion systems.

Their work unveiled a new state of matter – the Jahn-Teller metal – and showed that when the balance between molecular and extended lattice characteristics of the electrons at the Fermi level is optimized, the highest achievable temperature for the onset of superconductivity is attained.

As synthetic chemistry allows the creation of new molecular electronic structures distinct from those in the atoms and ions that dominate most known superconductors, there is now strong motivation to search for new molecular superconducting materials.

Team Leader Kosmas Prassides is a Professor at Tohoku University’s Advanced Institute for Materials Research, and a former Professor at Durham University, UK. He is an Independent Collaborating Principal Investigator of the JST-supported Isobe Degenerate π-Integration Project of Exploratory Research for Advanced Technology (ERATO). He is also the EU Research Leader of the Light Element Molecular Superconductivity (LEMSUPER) Project, supported under the JST-EU Coordinated Research Project “Superconductivity.”

The research utilized the synchrotron radiation X-ray facilities at SPring-8 (Japan) and the ESRF (France).

The results of the study were published in the American Scientific Journal Science Advances. 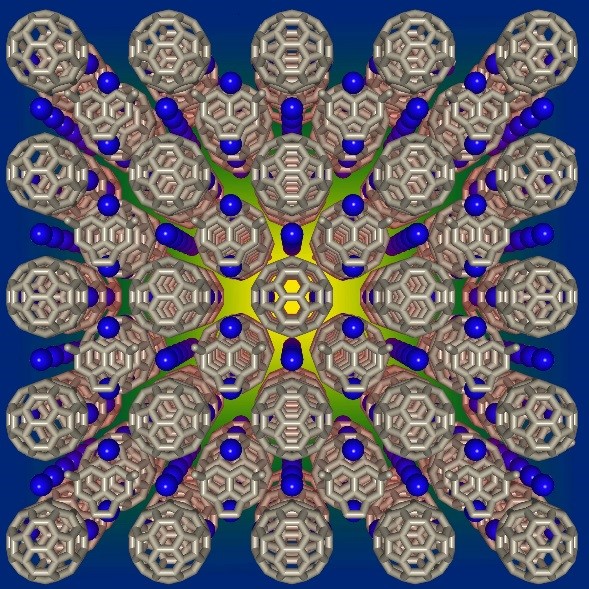 Fig. 1 Three-dimensional depiction of the crystal structure of the molecular fulleride superconductors investigated in this work.
The fullerene molecules consist of 60 carbon atoms arranged in a truncated icosahedral shape (a soccer ball) and pack in a regular cubic-close-packed array in three dimensions. Alkali metal ions (blue spheres) occupy vacant interstitial holes of octahedral and tetrahedral symmetry.

Fig. 2 Change in electronic state of the fulleride solids with change in volume per C60.
Schematic depictions of the Jahn-Teller molecular distortion of the fullerene units in the Mott-Jahn-Teller insulator (blue molecules) and the Jahn-Teller metal (yellow molecules), their respective molecular electronic structure (lifting of the orbital degeneracy due to the distortion), and the resulting intermolecular hopping of the electrons (prohibited in the insulator, weak hopping in the Jahn-Teller metal). This situation contrasts with the behavior of the conventional metal where hopping is allowed, the orbital degeneracy is retained, and the molecules are undistorted (green molecules). 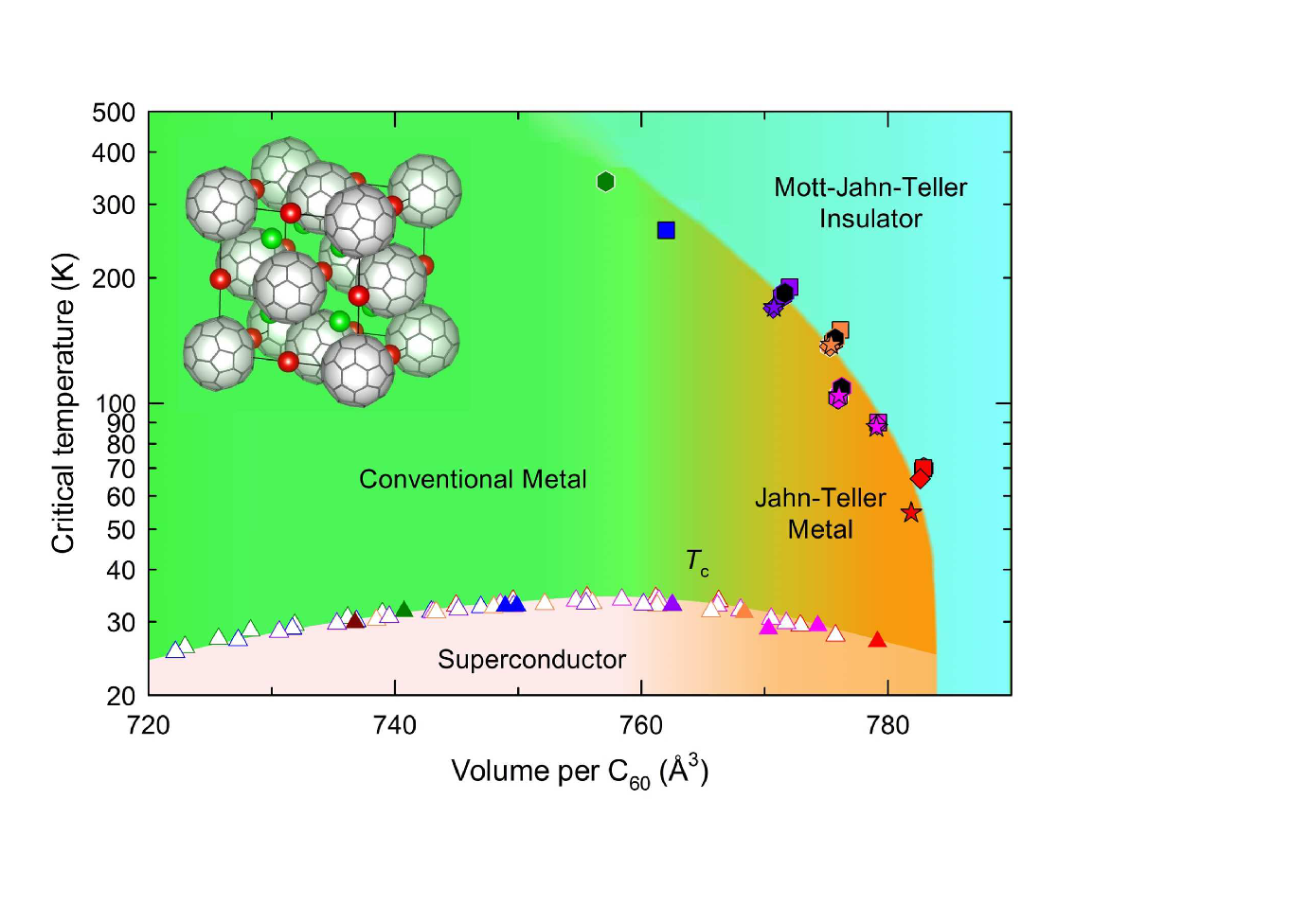