Glassy materials have a densely-random-packed structure, similar to crystals, but do not have any periodic atomic lattices. In 1952, Sir Charles Frank, British theoretical physicist, proposed that icosahedron is the most favorable local order in disordered metallic liquids, which successfully explained the feasibility of achieving undercooling to below the melting points. After that, icosahedral order has been the most generally accepted description of atomic structures of metallic liquids and glasses. From a geometrical viewpoint, however, icosahedra cannot fill the entire three-dimensional space, even in disordered systems, without distortion where icosahedral rotational symmetry is partially broken. The contradiction has not been solved because of the lack of direct experimental observations of real atomic arrangements in the icosahedron.

The research group successfully detected local icosahedral order in metallic glasses (Fig. 1) by utilizing the state-of-the-art coherent angstrom-sized electron probe (Fig. 2) and transferred the reciprocal-space diffraction into real-space atomic configurations with the assistance of computer simulations (Fig. 3). The researchers found that the icosahedra are indeed heavily distorted, as predicted by many theoretical models, but surprisingly the distortion is featured by local face-centered-cubic (FCC) symmetry, rather than random twist. This atomic packing scheme with low structure symmetry but dense atomic arrangement has not been found in any crystal and quasicrystal and represents a distinct atomic structural feature of metallic glasses. The computational homology analysis, first time being applied to the analysis of metallic glasses, demonstrated that the geometric distortions of icosahedral clusters in metallic glasses can be scaled up to long-range disorder in a simple manner in term of the topological connectivity. The co-existence of icosahedral and FCC-crystal-like symmetries in the distorted icosahedral clusters leads to the perfect distortion for a making disordered densely-packed structure (Fig. 4).

This achievement is a result of the collaborative and interdisciplinary research between materials science and mathematics in AIMR (Fig. 5). The marriage between atomic-scale experimental observation and mathematical analysis may pave a new way to explore the structure of complex materials and contribute to the development of innovative new materials. The article will be published online in Science as “Science Express” on July 12, 2013 (Japan Standard Time).

Figure 1 Photos of bulk and ribbon metallic glasses together with window glass. 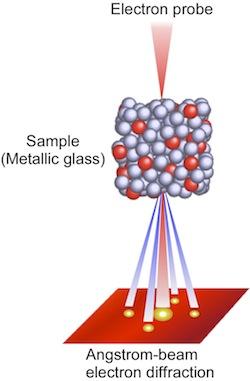 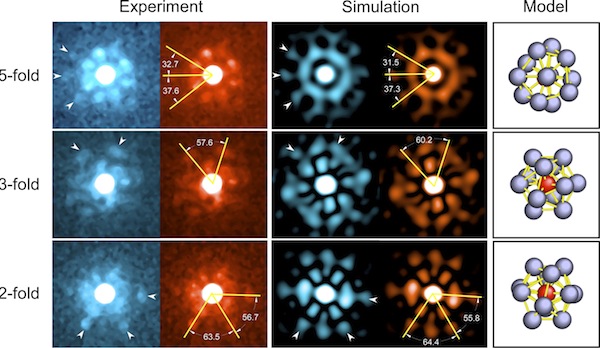 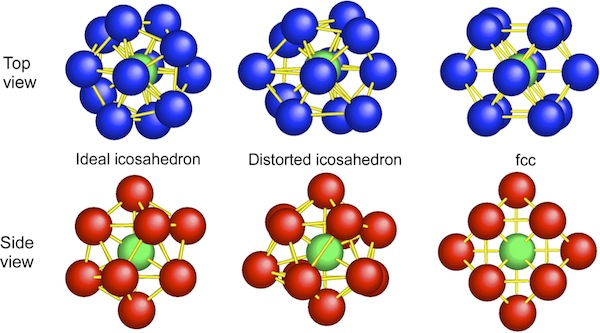 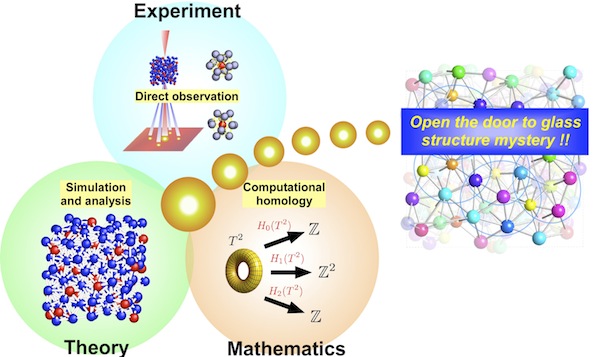 Figure 5 This research is an achievement of the fusion research between materials science (experiment and theory) and mathematics.