In general, conventional atomisation processes are roughly classified into two groups: gas atomisation and water atomisation. The former method uses high-pressure gas as the working fluid in atomisation, and the latter uses high-pressure water. Each has drawbacks: the former must meet safety regulations for the use of high-pressure gas, and the latter requires the purchase of expensive high-pressure water pumps. To reduce the price of fine alloy powders, we tried to develop an atomisation method using a high-velocity air fuel flame as a low-cost production method that requires neither meeting stringent safety regulations nor making a big-ticket capital investment. The machine used to create a high-velocity air fuel flame is called an HVAF system, and it uses the popular kerosene for fuel. The speed and temperature of a high-velocity air fuel flame are about 1600 m/s and about 1600 °C, respectively. In the first stage of the simplified atomisation mechanism, molten metal is spun under a high relative velocity; in the second stage, it is cut into small particles by surface tension. It is, therefore, essential that both the surface tension and viscosity should be small to fabricate fine powders, and these conditions will be realized when the temperature of the molten metal increases. However, because both conventional gas and water atomisation methods use lower-temperature working fluids, the atomisation temperature usually decreases during atomisation, which suppresses the atomisation mechanism for fine powders. From this viewpoint, to fabricate fine particles using the conventional method, the temperature of the feeding molten alloy should be increased excessively, and the treatment reduces the lifetime of the crucible and nozzle. In contrast, the developed atomisation method using a high-velocity air fuel flame can realize high-temperature atomisation in principle. Thus, it is a theoretically suitable production method for fine powder alloys, and we expect that the technique has sufficient potential to produce spherical fine powders a single micron in diameter. In addition, the costs for equipment and operation are much lower than those of conventional processes.

Explanation of this technique and future plans 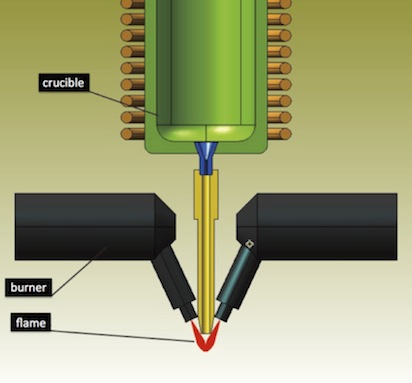 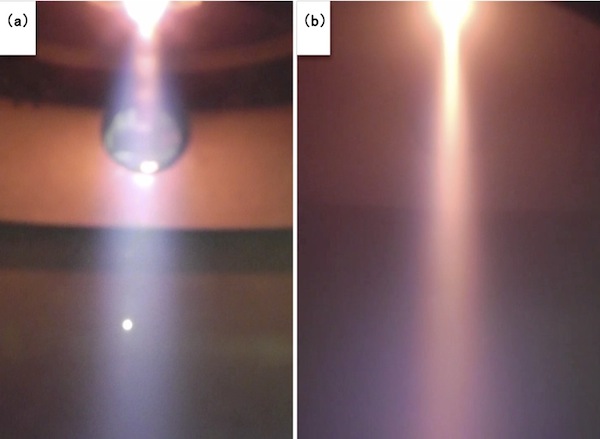 Fig.2 Combined flame from four individual burners (a) and appearance of atomization by using the combined flame.


The combustion conditions of the four individual flames are automatically controlled by computer. Figure 2(b) shows the appearance of atomisation by using the four counter-crossed flames shown in Fig. 2(a). The colour of the molten alloy becomes dark in the area outside of the combined flame. By adding the developed specific cooling system, which enables us to quench the atomized molten alloy powder in a dry state in the CFJA process, we obtained an amorphous Fe73.2Cr2.2Si11.1B10.8C2.7 (Fe-2.5Cr-6.7Si-2.5B-0.7C in wt.%) powder.


The phases were characterized by X ray diffraction, as shown in Fig. 3; the spectra exhibit only a broad halo pattern of amorphous structure without any distinct Bragg peaks. A scanning electron microscopy image of the atomized powder is shown in Fig. 4. Because the powder size classification is inadequate, a wide dispersion in powder size is recognized. In addition, the smallest size is identified as about a single micron. The atomized powders are spherical in shape; therefore, we can expect good fluidity and good densification for powder metallurgy processing. 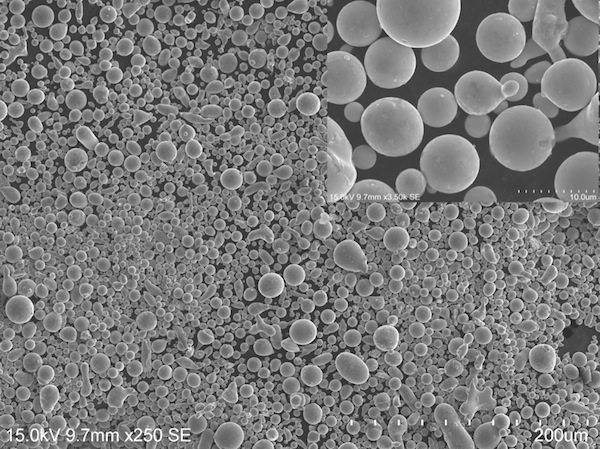 
This atomisation process was developed with the aim of mass production of iron-based amorphous fine powders at a moderate cost. By a combination of specific cooling systems, amorphisation of atomized iron-based powder will be achieved. Iron-based amorphous alloy powders have already been successfully and widely industrialized, and the market continues to grow. In addition, iron-based amorphous fine powders are expected to be applied for the metal injection moulding method and thermal spray coating. To promote the field of amorphous powder metallurgy, further development of the new atomisation process to both reduce the powder size and decrease the price should be indispensable.