「Experience the same research environment as in US」 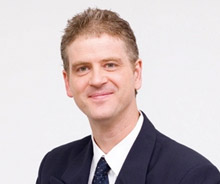 I feel that AIMR is a new and unique opportunity in a very serious effort by Japanese environment to open itself up to for international researchers. The life of international researchers in this institute is much easier than in many other places in Japan, because we have staff who are fully bilingual, both Japanese and English. We can easily communicate about any requirements that researchers have with staff. The other reason is that the organization’s structure of the institute also involves some of the typical western processes that make it easier for foreign researchers to integrate.
One aspect which I personally like very much about this institute is that, once a week, people from many different areas of research from different departments on campus come together and spend time talking about research or anything beyond research, over a cup of tea and some snacks. You can meet people that you typically don’t meet in your regular affairs, your regular weekly work, because they are so far removed from your research. Therefore they allow you to come up with new ideas, new points of view and ultimately create multidisciplinary area. This is a very interesting approach to form large multidisciplinary groups.

Europe and United States have a very strong exchange, and many people move forth and back very frequently. That allows both Europe and US to benefit from the exchange. But Japan has not had such a strong exchange historically, and has in some areas been isolated from the international arena. I think that the WPI program is a real chance to change such a situation and allow Japan to participate in international brain circulation fully.

I like Sendai very much. There are many reasons for that. Sendai is a quite unique city in Japan. It’s big enough that you can do anything you want, to have some great shopping, night life, good transportation connections which is important for the kind of work that we all do. At the same time, Sendai is small enough that if you jump on a local train for half an hour, you can do some spectacular hikes, you can go to the mountains, visit many hot springs……
You have the benefit of the large cosmopolitan city and the proximity of nature, so that is really a very, very pleasant way on living for me. 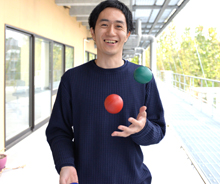 What do I do at AIMR as a mathematician? One quick answer is to try applying the mathematical way of thinking in materials science. At AIMR, Tohoku University, when you talk with non- math people, first thing you’ll notice is that many math do exist in problems of other fields. But that is not the only thing. People here have great experiences in their field. Each field has its own culture of research. Chatting with many people, and touching the idea of many kinds of research, I have felt a positive change in my own “intuition in mathematics.” I’m a bit of a free spirit, and not very good at following rules by other people. Science, or nature, should originally be connected, but people have artificially divided them into different fields. AIMR, however, is a place where people study both without barriers. It is a fun place for both mathematics and materials science.

Humm.. Don’t you have one extra 0 in the price? I sometimes feel this way in Sendai. That doesn’t mean Sendai is an expensive city. Cheap and happy. We math people have that sort of culture, and I loved living in towns with many shops full of young people. In Tokyo for example, each neighborhood has its own atmosphere, and so do people living there. But in Sendai, you can find shops of extraordinary luxury right next to easy-going shops. Both in research and daily life, I love to take a carefree stroll and I am often surprised to find myself accidentally in such expensive shops. Looking at the people coming and going, you see many with a diverse “atmosphere.” As I’m someone who basically likes to move on foot, Sendai is an interesting city full of fresh surprises. Sendai, maybe here is a good culture to cross boundaries, and so, AIMR found its home here. Imaging such a thing, I enjoy walking here.