The passion of research in AIMR is unforgettable. 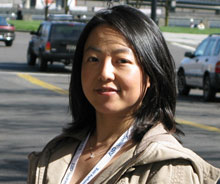 I obtained my Ph.D. in electronic physics from Peking University in 2001. Afterwards, I worked as Assistant Professor in the Institute of Physics (IoP), Chinese Academy of Sciences (CAS), until Dec. 2003. I moved to ISIR, Osaka University (2003.12-2008.3) as postdoctoral fellow before being promoted to Specially Appointed Assistant Professor (full time) on STM-luminescence.

From 2008.4-2011.11, I got the opportunity to work as Assistant Professor in Xue group, WPI-AIMR. While working in WPI-AIMR, I collaborated with different groups: Hitosugi group and Chen group. I used for the first time a powerful tool to investigate surface physics: low-energy electron microscopy/photoemission microscopy (LEEM/PEEM). Using that advanced technique, we studied the interface properties of topological insulator Bi2Te3 ultrathin films (Nano Lett. 11, 2601 (2011), etc.). The open research environment encouraged by WPI-AIMR stimulated me to get internal financial support from WPI-AIMR for two fusion projects. Using the nanoporous gold films synthesized by Chen group, we investigated their capability for SERS and achieved single molecular detection (Scientific Reports 1, 112 (2011), etc.).

The passion of research in WPI-AIMR is unforgettable. Based on the PEEM knowledge that I obtained in WPI-AIMR, I joined IoP, CAS from Nov. 2011 as Specially Appointed Associate Professor, focusing on PEEM research in the Shanghai "Dreamline" project.

Fusion Research at AIMR, Tied to the Present Day 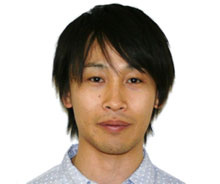 I became a member of AIMR in April 2008, approximately half a year after its establishment. At the time, efforts were underway to boost the personnel strength of AIMR. However, in my four years there, AIMR has undergone significant changes in both tangible and intangible aspects, and I have experienced personal growth amidst the institution’s changes.

One of these changes was the commencement of grant payments for fusion research in FY2009. At the time, there had been much pressure from related parties to apply for research grants, which were successfully obtained. Under the grant, I became involved in a joint research project together with a group of synthetic organic chemistry scholars. This project yielded unexpected results, and continues to be one of the most important research themes that I am currently working on. Even if you can come up with an outstanding research theme, it does not necessarily mean that the research will proceed as planned. Nevertheless, you just give it a try, pick up the unexpected discoveries that you make along the way, and make the next connection. The degree of unexpectedness of discoveries made during that process is, not surprisingly, much greater when the process is undertaken as part of fusion research, where you are not restricted by your own boundaries. Therefore, this theme helped me to obtain research grants, and I believe that it played a significant role in helping me to gain my current position.

Today, I supervise a research seminar at the Nanoscience and Nanotechnology Research Center. This is an opportunity for me to apply the capabilities I have learnt, and grown, in my four years at AIMR. There are many young researchers who are my peers in this Research Center, and we operate the research laboratory through a daily trial-and-error process together with the students. Joint research activities between the respective research laboratories are also more active than I had expected. The spectrum of their research is extremely wide; in other words, the potential for fusion research is being born in various parts of the center every day. The open-minded perspective that I have gained at AIMR, which is a center for fusion research, has become my strength in my position as a researcher here in Osaka.